Swim with Sharks in the Open Ocean

It seems as if you are suspended from the ceiling of a vast blue room. Sharks swim curiously around you and you swim curiously around them.  Fear and disillusionment already sank to the bottom of the ocean long before you got into the water. Your guides who are biologists, shark behavior experts, researchers, and conservationists understand the significant role these creatures play in our world. They shared their knowledge with you and their expertise made it possible to swim with sharks uninhibited in their world. The boat you took from Haleiwa is behind you and your guides are swimming in the water with you. 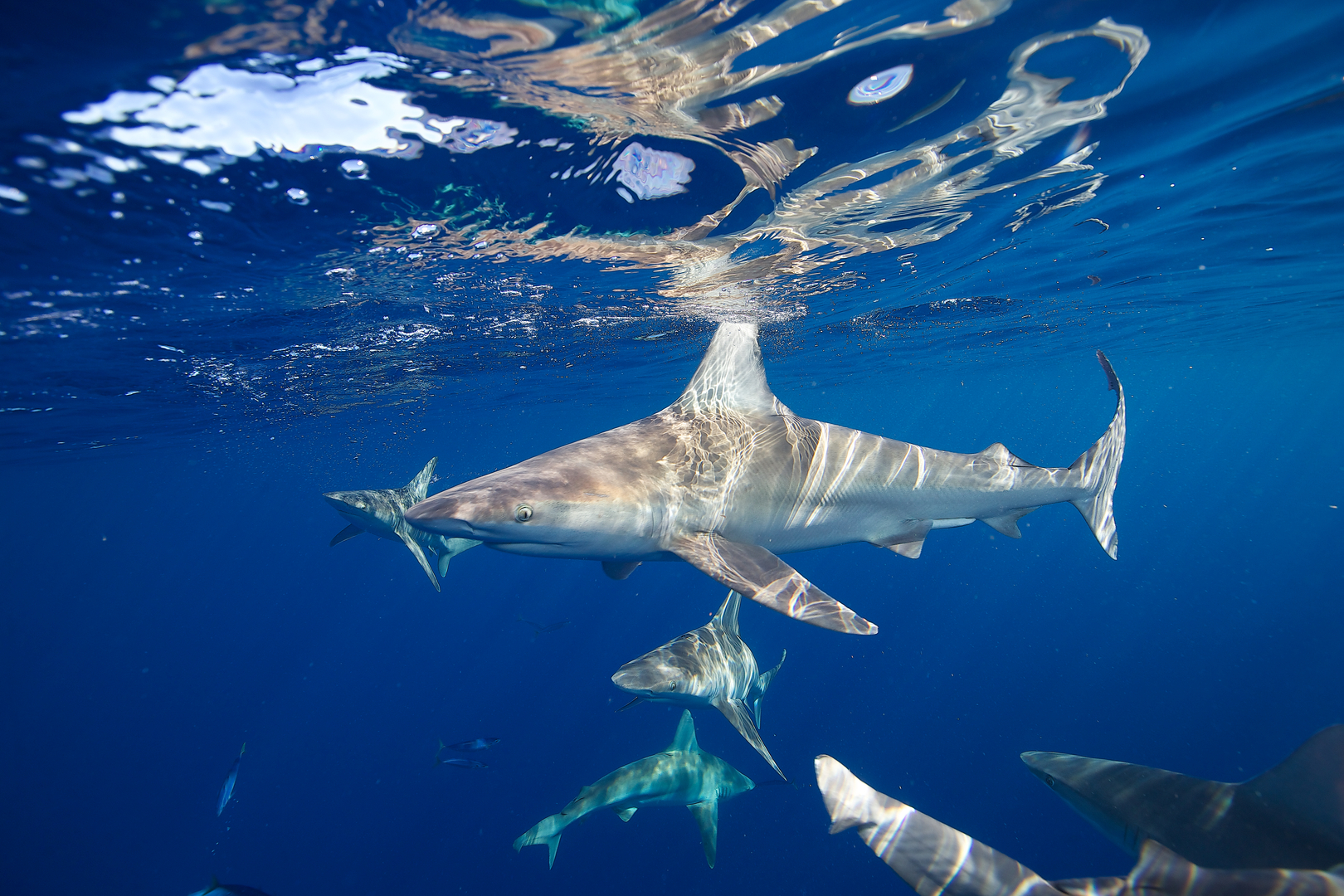 “Our main goal is to show people sharks are not our enemies. They don’t target humans and you can interact with them safely with the right knowledge.” -Michelle Mason

The group will launch from the Haleiwa boat harbor.  Park next to the brown restrooms on the west side of the restaurant near the entrance. Take the walkway closest to the restaurant Haleiwa Joe’s. The boat is white with a blue canopy and a Oneoceandiving.com along its’ side. The seas are usually calmer in the mornings but bring crackers and motion sickness medication if you are prone to seasickness. 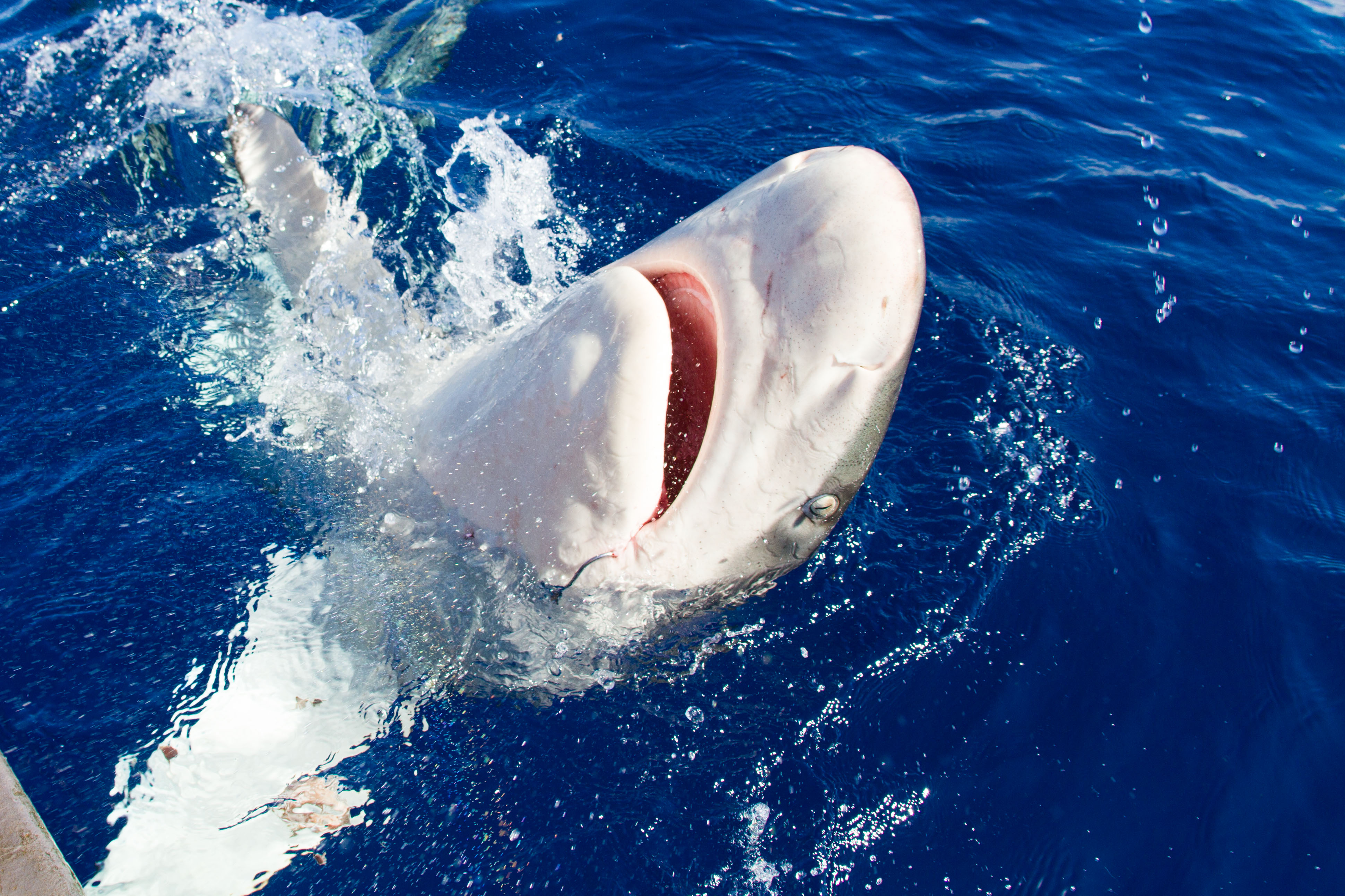 Michelle Mason, a research assistant at One Ocean Diving said,  “Just like all marine life, human impact is one of the biggest threats to sharks.” She said plastic can cause the animals to suffocate or starve once it is ingested. “It thinks it’s full since it can’t digest the plastic.” Plastic usually takes centuries or more (or never)  to break down. It is usually toxic and can absorb other toxins.

Mason said fishing is another huge problem. “It’s not just direct shark fishing, but long line fishing.” According to the Food and Agriculture Organization of the United Nations website, long line fishing is a fishing technique targeted to catch primarily tuna. A main horizontal line of about 250 to 800 m has vertical lines with baited hooks connected to them. Buoys set at intervals keep longlines afloat. Long line fishing is a very effective way to catch sharks. Mason said it’s one of the biggest killers of sharks and other marine animals because of the high amount of bycatch. Bycatch is a term for anything that fishermen catch outside of what they intended to catch.

Mason said, “Even if a shark is able to evade long lines, it is still entirely possible for them to get entangled in ghost nets (nets adrift in the ocean) and strays fishing lines.”

She said there is also a high amount of sharks caught from fishing from the shore. Once fishermen release sharks, they still can die of stress.

What One Ocean Diving is doing to help

One Ocean Diving is working to ban killing sharks and rays in Hawaii. They are looking for support to pass a bill they introduced. Mason is encouraging people to support SB2079 and to contact the senators of Hawaii.

Ecotourism is a huge part of what they do since their research is funded by it. Mason said they try to find trends and correlations in shark population counts. “It can help with the conservation aspects for our local species.” Mason said their focus is on sharks but they are interested in other marine life as well. “We have reef and beach cleanups every month.” She suggested to follow @oneoceanconservation on instagram to know when and where the cleanups happen. It happens “once a month usually on the 2nd Saturday.”

Swim with sharks without a cage!

Swim into the crystal blue home of Galapagos sharks and reef sharks without the confines of a cage. Researchers will educate guests about the vitality of sharks in our oceans, the dangers that threaten them, and dispel Hollywood myths.