Some of the best ramen on Kalakaua

Ramen is a thing. There is definitely a fair bit of hype surrounding it. Rumor has it, it became popular in New York and made its way around the US. No worries if this is your first time reading or hearing about it. It is nothing special– it is a common noodle dish that can be found in almost every corner of Japan. It is literally our version of a burger joint, delicatessen, food truck, etc. It is Japanese soul food with its origins in Yokohama Chinatown, which happens to be this writer’s hometown.

The restaurant we visited today was Momosan, named after Masaharu Morimoto, the owner and famed Iron chef. More about him here. We visited Momosan in the late afternoon; more specifically, it was around 3 pm on a Tuesday. The restaurant was operating at around 30% capacity. Still, the place felt busy and there was a young energy about it. The BGM was popular music, not loud enough that I could actually tell you what the playlist was, but enough to keep tempo. The staff was young, lively, and attentive. They all seemed to enjoy working there. Needless to say, we tipped well.

There were solo diners, groups of friends, families, and couples. The majority of the seating was outdoors. Parasols provided some shade for each of the tables and the perimeter of the restaurant was lined with vegetation offering diners separation from the bustling streets of Waikiki while imparting a mildly tropical vibe to the restaurant’s ambiance.

The actual physical menu was unimpressive. It was a laminated, large-scale sheet with food on one side and drinks on the other. On the aesthetic level, the layout lacked inspiration and didn’t kick-start my appetite. On an informative level, the descriptions of the dishes were, at best, a list of main ingredients and lacked any additional information.

I thought the pricing was reasonable considering the trendy venue and hyped-up reputation.  All of the ramen dishes were 18 dollars and the appetizers ranged from 6 to 18 dollars. This place gets my double thumbs up if you are an everyman looking to dine out.

This writer immediately honed in on the Spicy Vegan Miso. However, our server was a young man who was eager to help us navigate the menu. He mentioned several key dishes which included the most popular dish, the Tonkotsu Ramen, followed by the Spicy Dan-Dan.  We decided on these two dishes since they were pitched as fan favorites.

For appetizers, we chose two dishes: the Kakuni Bao and the Sticky Ribs. Our waiter kindly brought to our attention that a Momosan set pairs a main dish and a small-portioned appetizer for a reduced price. This was the ticket. We paired our dishes with our appetizers and we were ready to roll. 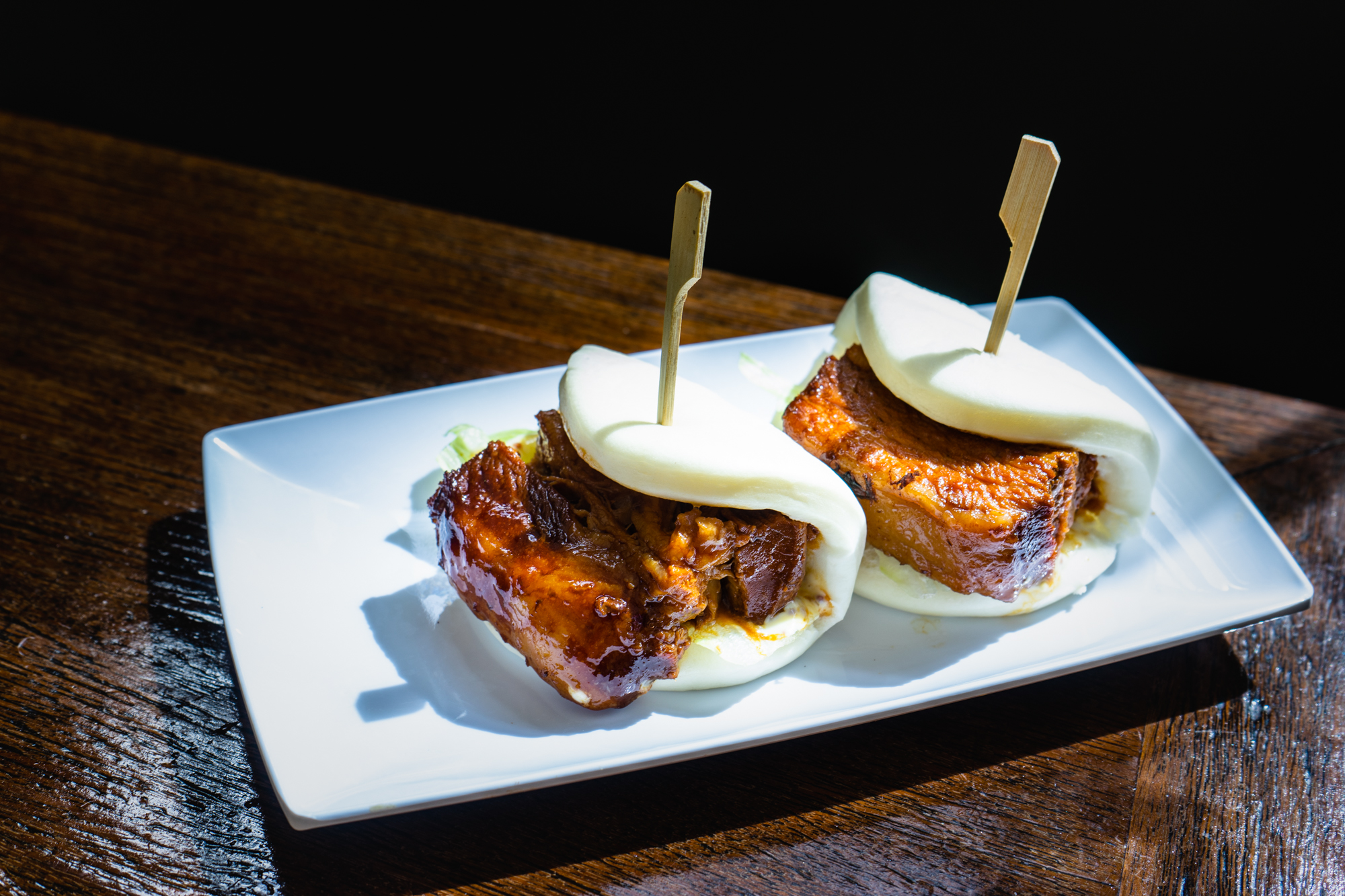 The first appetizer was the Kakuni Bao. Kakuni is a Japanese braised pork belly. You’ll find this dish in virtually every home in Japan. It is so common you’ll find 2 minute microwavable versions of this dish in every convenience store. What makes this dish worthy of your tastebuds is how well they paired it with the bao which is a traditional Chinese bun. Inside this bao you’ll find a hearty portion of meat with a little lettuce and dijon flavoring. The first bite is heavenly. The bun is sticky, stretchy, soft, and chewy. In my opinion, they nailed the bao. The kakuni is rich and fatty. It has a melt-in-your-mouth texture with a unique sweetness you won’t find in western dishes. This is the soy sauce and sake you’re tasting.  The lettuce does bring some crisp texture, but it’s really there to carry the dijon flavor evenly throughout the dish. At first, the dijon mustard felt out of place and unnecessary, but I get it. Traditionally kakuni is served with a Japanese yellow mustard called karashi. The dijon is the nonconformist rebel in this bite; it is mellower than the traditional karashi, but pairs very well with the overall flavors and the sweetness of the pork. Although we both agreed that the dish would benefit from a sprig of fresh cilantro to add a little bit of herb and green to the dish, the individual elements were on point and perfectly assembled. 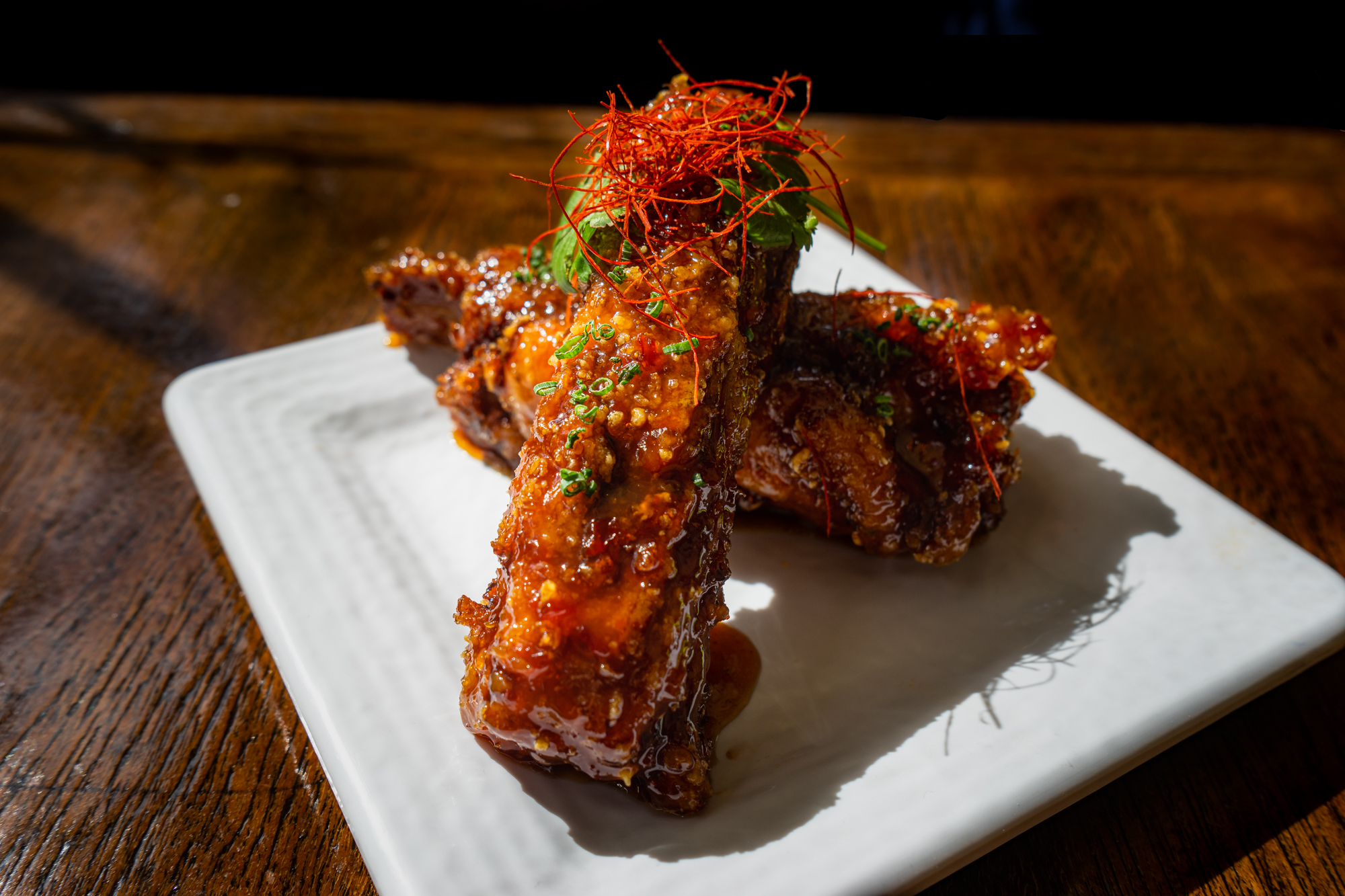 The sticky rib– wow. The menu said it was twice cooked. They weren’t joking. This writer was thoroughly impressed with the tenderness of the ribs. Instead of overloading you with adjectives, I’ll simply say that I was able to debone the rib with just a pair of chopsticks. Using gravity and a few pinches here and there, the meat and cartilage just fell off the bone. The taste was strong and salty with a tad of sweetness and a hint of sour. I am pretty sure this was Momosan’s play on American barbecue. With the first bite, you’ll taste hints of ginger and garlic bonded together in a blend of sweet chili and Hoisin sauce. The outer layer was moist and crispy while the edges were crunchy without being tough or overcooked. We totally dug this appetizer– bold flavors married with perfect execution. This is the type of dish that keeps you reaching for more. 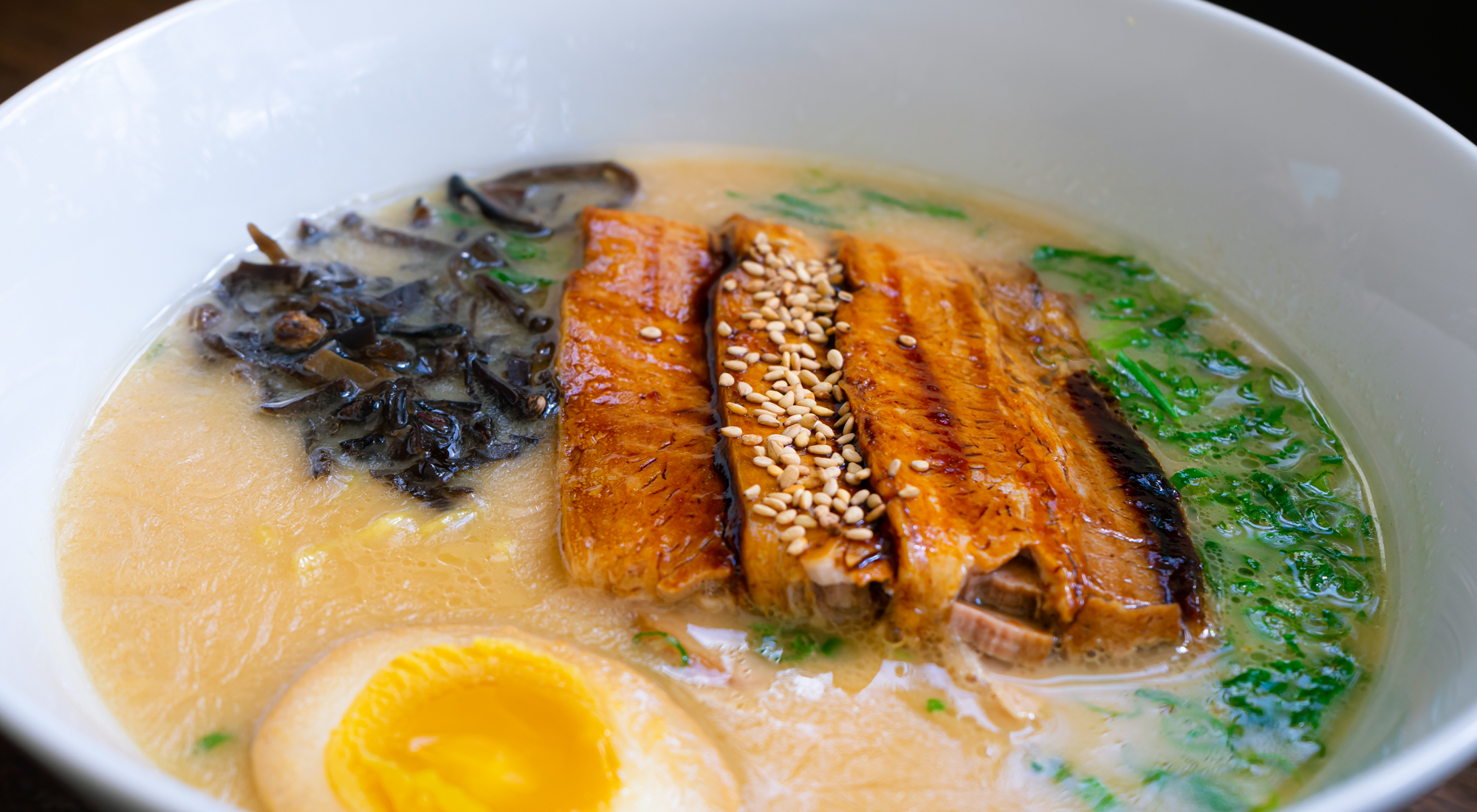 Tonkotsu ramen, also known in Japan as Hakata ramen. The server mentioned this was by far their most popular dish and that this ramen was almost every other dish prepared by the kitchen. Tonkotsu is another southern Japanese dish like the kakuni, which uses a series of pork parts and pork bones to create the rich base soup. When you eat a bowl of ramen, this writer recommends some simple steps so you can better enjoy your experience.

First, take a sip of the broth using the soup spoon. In my opinion the soup is the “make it or break it” of a bowl of ramen. Take a big sip and let the soup coat your tongue. What you are tasting is the savoriness or umami of the soup. You’re looking for a broad range of flavors. Follow it by several smaller sips and try to isolate each flavor. Don’t let the soup linger too long, though, as the soup will start to coagulate. Take in the visually pleasing signature milkiness of the pork broth and take note of the clear drops of oil that float over the surface as the noodles settle. When I took my first sip, I immediately tasted the bold garlic flavor, the second and third sips highlighted the sea salt and scallion while the deep richness of the pork broth held steady throughout. The Momosan tonkotsu broth had great depth and lots of umami; the broth is richer and more complex than the typical ramens I am used to eating in Japan, but I thoroughly enjoyed the heady blend of rich flavors.

Let’s talk about noodles. In Japan, slurping your noodles is customary. Kids, grandparents, house wives, violin teachers– everyone does it. I did it at Momosan in Waikiki. That’s how we eat noodles. That’s when I realized that these noodles were very different from the ones back home. They were cut way shorter! I had my epiphany moment. Western culture dictates we chew our food and slurping anything is considered rude which makes eating a traditional bowl of ramen from Japan a culinary nightmare. Momosan has altered the length of the noodles to make them more manageable. This next opinion may be very biased, but I hated it. It left me wanting more noodles per slurp. I can only explain it like a drink with too much ice and you hit the bottom way before you are satisfied. You keep sucking on the straw, but nothing comes up. Don’t get me wrong, the noodle itself was delicious. It was on the thicker side which is typical of tonkotsu ramen. It had great ashi (stretch) and medium koshi (firmness). No complaints here.

Now that you’ve tasted the soup and noodles, you can enjoy the toppings like the hanjuku tamago, a soy-marinated soft-boiled egg split in half, as well as the three huge slabs of pork belly displayed on top of the bowl. Great job on not going for this right off the bat.  You’ll notice your patience has paid off by the increase in the tenderness and how quickly it falls apart on your chopsticks. When you take a bite, you should taste the tare (sauce) which was pre-seared into the meat. These pork belly pieces are big, fatty, and meaty. Momosan did not disappoint here. The portion size, taste, tenderness, and impact hit home. Enjoy the noodles along with the pork belly and the soup. Going back and forth between the three, you’ll quickly find yourself at the bottom of the bowl wishing you could eat it all over again. 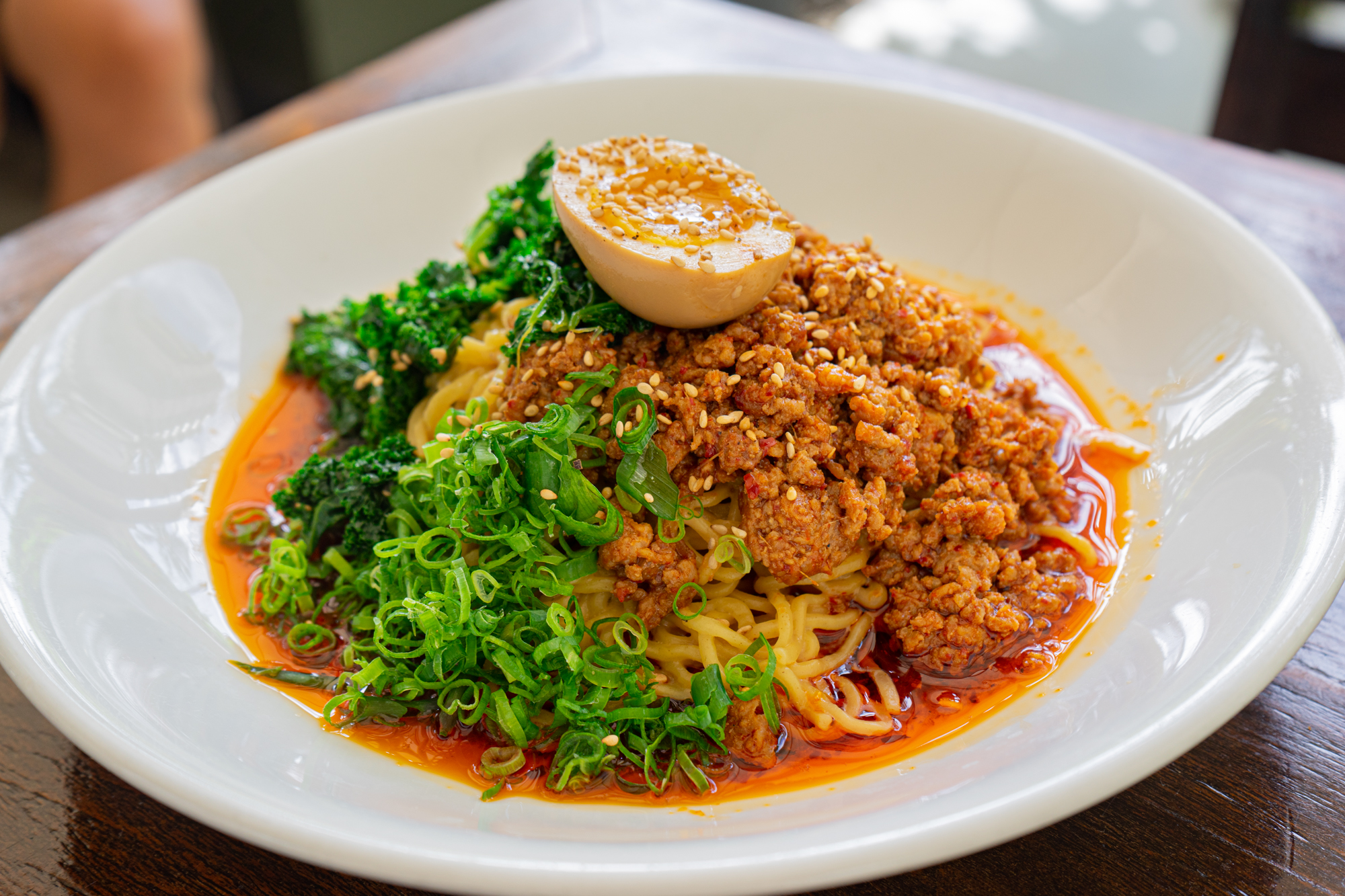 The finale was the Spicy Dan-Dan which is a Chinese Sichuan brothless noodle dish. We have to say that it was visually stunning. The green of the fresh kale and scallions against the hot red chili oil gave this dish a vibrant look. My partner, Momo, was especially happy with the kale. She commented that most restaurants would have served the dish without the kale, and as a veggie lover, she appreciated the healthy twist on the Sichuan favorite. There was also a generous heap of scallions, so for the herb lover, this dish was satisfying.

The first bite was dazzling. Depending on where you started, you hit a myriad of different flavors. The lows come from the tender meat and the bitterness of the kale; the highs come from the slight heat of the chili sauce. I remember we were making comments like we were eating a totally different dish. Momo was saying it was sweet while I was saying it was spicy. I eventually realized that this dish combines four very distinctive elements– the spicy sesame chili oil, the savory-sweet miso ground pork, the woodsy starchy noodles, and the bitter greens– each with wideldly different flavor profiles.

The meat was flavored with miso giving it a deep, savory flavor with a toasty and slightly salty but sweet richness with a very high umami flavor. The chili sauce was oily, tangy, and spicy. The kale was coated with sesame oil and the heat from the hot tonkotsu broth slightly wilted the greens to soften the texture and soften its palate. The noodles were substantial with good ashi (stretch) and koshi (firmness).

As you can see, there was a lot going on. I believe plating was an issue. It came out in a Williams-Sonomaesque pasta plate, and this hurt the dish’s potential. Hear me out. A spicy Dan-Dan dish has to be mixed well for all the flavors to come together. It may have been better if the noodles were served in an oversized bowl which allowed for more mixing and combining. In addition to the noodles being served in a plate rather than a bowl,  the noodles were double stacked (two bundles of noodles were stacked on top of each other) which made it even harder to mix in a shallow plate.  What we ended up with was a starch to oil ratio that was too unbalanced. I remember making a comment that I wanted a bowl of white rice to help me get through the oil. All in all, we want you to try this dish for its potential, just remember to mix well before serving.

So do we recommend this restaurant? 100 percent, yes. This place provides expertly curated bowls of ramen that are well worth your time and money. The versatility of the location and the ambiance make it a great choice for everyone from families to romantic couples. The staff is lively and helpful. All in all, it’s a fantastic spot to hit a bowl of ramen on the strip.